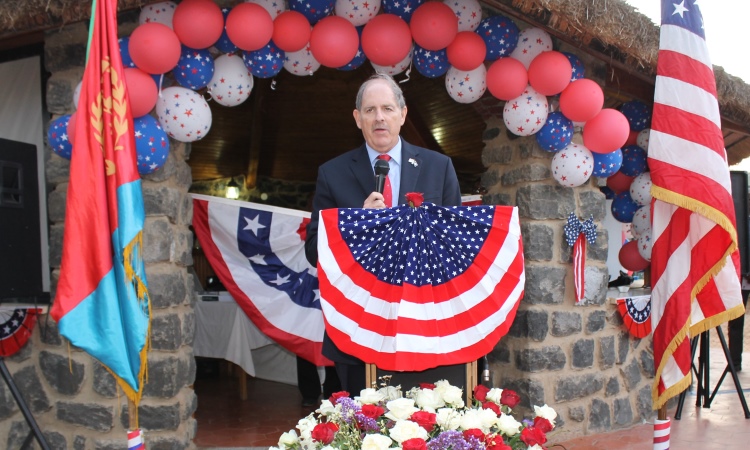 Almost 200 people attended the annual July 4 reception held at the United States Embassy in Asmara.  Despite the good rains in Eritrea this year, the night of July 4 was clear and the crowd enjoyed a variety of American food as well as a slide show of images of Americans celebrating July 4 and a wonderful a capella rendition of the Eritrean and U.S. nationals anthems performed by a renowned local artist.  There was also dancing to Eritrean and American music.

In his remarks, Chief of Mission Louis Mazel highlighted the positive experiences he has had with the Eritrean people during the course of his two years in the country and urged the government to open up and welcome even more international visitors.  The Chief of Mission told the crowd that “ Eritrea holds great promise as a premier eco-tourism destination for the world with its spectacular mountain scenery, diverse, friendly people, beautiful islands and Red Sea beaches.”

Mazel also recounted his experiences is participating in the numerous festivities surrounding the 25th anniversary of Eritrea’s Independence and learning much about Eritrea’s struggle for Independence from the photo exhibition held at the Expo.

Commenting on the meaning of July 4 and the founding of the United States, the Chief of Mission said the United States is an “immigrant nation, founded by people fleeing religious, political and economic persecution in Europe and throughout America’s history it has welcomed tens of millions of immigrants and refugees fleeing war, violence, religious persecution, and poverty from around the world.”

He noted that America always returns to the core values upon which it was founded – a self-governing nation where all people are created equal, are entitled to life, liberty and the pursuit of happiness and where opportunity can be realized by anyone with determination and a dream.