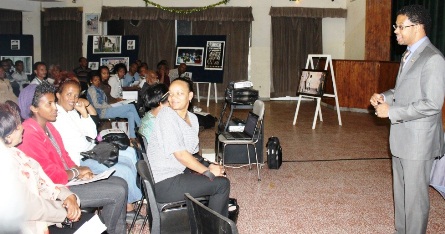 The American Center’s Speakers’ program observed Black History Month by presenting “The Story of Ruby Bridges.” The U.S. Embassy’s Public Affairs Section featured Clifton Jeffery, the Embassy RSO, who spoke to an audience of over 70 attendees. Mr. Jeffery, a former lawyer, began his lecture by explaining the legal history behind the institution of segregation. He explained the evolution of U.S, legal theory on segregation and the importance that the Supreme Court’s decision, Brown vs the Board of Education in 1954, had on its eventual demise. Focusing on the legal battle in the field of education, he spoke of the eminent black Americans who started the civil rights movement as early as the 18th century. Following his speech, there was a lively question and answer session where Mr. Clifton discussed a range of topics posed by the audience.