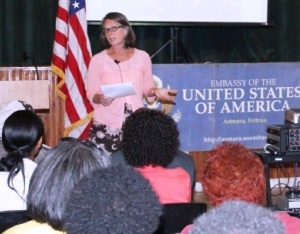 On October 30, Deputy Chief of Mission, Lori Peterson Dando, spoke to a skeptical audience about “Halloween”; its origins, how it is celebrated in different countries and how it arrived in America through Irish immigrants.  Feted with Halloween candy, raffle prizes and the DCM’s special glasses, the participants warmed to the idea of trick or treating.  Halloween, she explained, is an annual celebration of the dead that is observed in a number of countries including in the States.  While dedicated to remembering of family and friends who have passed away, it’s celebrated by kids collecting treat from neighboring houses wearing costumes.  Audience members offered their own theories about the use of pumpkins, however, dismissing the story of Stingy Jack and opting instead for the resemblance of the gourd to the setting sun. Attended by more than eighty people, fun was had by all.